An issue was discovered in 1Password Secrets Automation. The issue affects anyone using 1Password Connect server 1.1.1 or earlier.

This issue was discovered internally in May 2021, and various mitigations to address the issue were released over the course of May and June 2021. It has been assigned identifier CVE-2021-36758 in the Common Vulnerabilities and Exposures database.

Who may be affected

Anyone who uses 1Password Connect server 1.1.1 or earlier may be affected. You are affected by this issue specifically if:

Starting June 28, 2021, all affected tokens will be marked “unverified”. When you sign in to your account on 1Password.com, you’ll see “Action required” next to unverified tokens.

To prevent any interruption in service, upgrade your Connect server deployments and verify your tokens. You can follow these steps if:

Everyone using 1Password Connect server should upgrade to version 1.2 or later.

If you don’t have any current Connect server deployments, you can skip this step. To prevent issues if you plan on using your existing tokens in future deployments, continue to the next step.

If you have automations that rely on specific tokens, you can verify them, so they can continue working. Only verify tokens that you have confirmed have the access you expect. To verify a token: 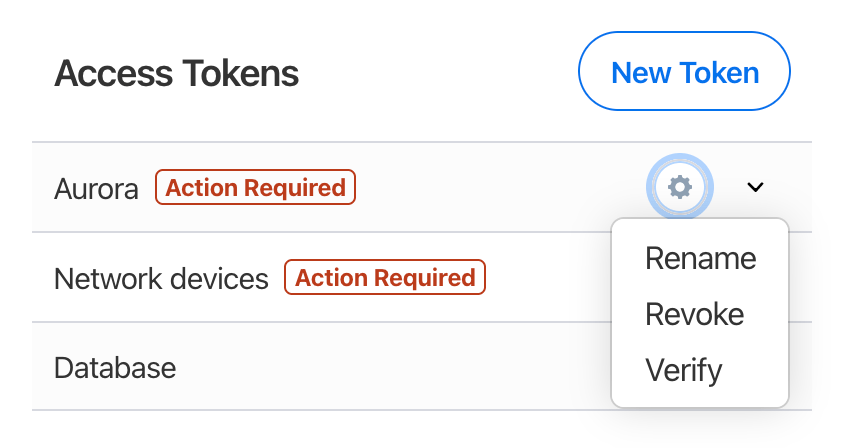 If you have unverified tokens that you no longer need, click next to the token you want to revoke and choose Revoke. After you revoke a token, you can generate a new one.

Your 1Password Connect server keeps event logs for tokens that attempted to access vaults they shouldn’t have access to. To verify whether any tokens have been used outside of their created authorizations, audit this history.

The 1Password Connect server is a tool for IT administrators use in their own networks to automate using secrets stored in 1Password in deploying and maintaining infrastructure. This bug doesn’t affect anyone that doesn’t use 1Password Secrets Automation.

This issue allows users that have restricted access to create tokens to bypass those restrictions. For example, suppose you have a 1Password account with 10 vaults, and a Secrets Automation is configured to provide access to 3 of them: Foo, Bar, and Baz. If Alice can create tokens that can access only the Foo vault, this issue allows Alice to create a token that allows access to Foo, Bar, and Baz - all 3 vaults the Secrets Automation may access. In addition, Alice is also able to set other arbitrary attributes on the token, such as arbitrary expiry dates. To do this, Alice must manually create these tokens in a way that’s not offered by the 1Password web app or command-line tool.

Permission to create tokens in many circumstances already constitutes a certain level of privileged access for that user - usually limited to a set of IT administrators. Nonetheless, within this group many will want to enforce a principle of least privilege when creating tokens. This issue can be used to circumvent enforcement of that principle.

A wise person once said - “given enough eyeballs, all bugs are shallow”. Given the amount of eyes we’ve had on this, we should have found this issue prior to release. Missing validation leading to an authorization problem is a terrible class of bugs, and we apologize for releasing a product with one.

We’ll update our development process to reduce the chance that bugs of this class will slip through in the future. We’re investigating means of authentication and authorization that are less susceptible to the class of bugs discovered here.